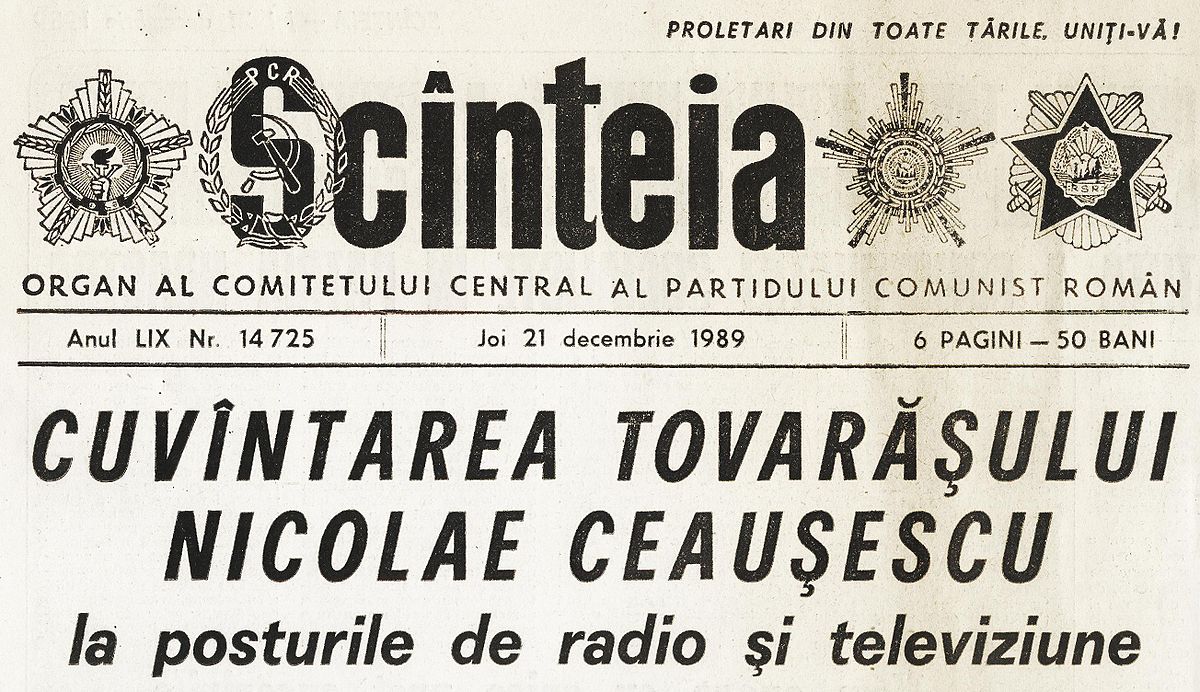 On the 16th of December, 1989, the protests in Timisoara, a Romanian city near the Western border, led to what some call “Romanian revolution”. The early protests were not held directly against the oppressive communist regime, but rather for expressing the disapproval of the Hungarian minority against the eviction of the Hungarian Reformed church pastor László Tőkés. Soon, the early protests found massive support from the Romanian population, which rallied along against the Ceausescu’s regime.

Words like “Liberty” and “Down with the regime” or “Down with Ceausescu” were heard for the first time in public during the 42 year-long communist regime. The country was at that time ruled by Nicolae Ceausescu and his wife, Elena Ceausescu. He was the president of the Communist Party and the president of Romania, and Elena was the Deputy Prime-Minister.

Their decision for the military to use live ammunition against the protesters led to hundreds of deaths, both in Timisoara and in the other major cities where the protests spread. Bucharest was the place where most of the deaths occurred, following the clashes between the protesters and the army.

Later on, the army joined the protesters and Ceausescu was finally caught, sentenced to death and executed on the 25th of December, during Christmas, after a quick trial conducted by a so-called “tribunal”. His execution was in fact part of a plan drafted long before the “revolution” by internal silence opposition to the leaders and external forces, mainly Russian and Hungarian, as later was proved.

During the events, manipulations like “the terrorists killed the protesters” were exposed when no terrorist was found during the “revolution”. The army avoided to take responsibility for the deaths and blamed former Militia and Securitate for the incidents.

Also, there were armed incidents when military fought against militia and anti-terrorism forces, which resulted in additional deaths. All these are not yet solved in court.

Was the Romanian Revolution a revolution after all?

Some contest even the term “revolution” in association with the events which took place during December 1989 in Romania. By all definitions, revolutions have some similarities:

The contesters argue the events were not controlled or conducted by the Romanian people, as the so called revolution was in fact conducted by external and internal forces.

Also, the regime was not at all replaced, as in the National Salvation Front, the political party which replaced the Communist Party and ruled Romania from 1990, were former members of the Communist Party. Ion Iliescu, who was presented during the events as the savior of the nation, was in fact a communist and one of the former close aids of Nicolae Ceausescu.

The conclusion of those who contest the term “revolution” is that in 1989 external and internal forces, not the people, decided to overthrow the existing leaders and replace them with others. The original plan, designed long before 1989, was to keep the communism, but the events from the other communist countries, such as Eastern Germany, Poland, Czechoslovakia and Hungary, showed there was no room for doing this in Romania while all the other communist countries turned to democracy. Despite this change, Romania was led by former communists long after the “revolution”, smart enough to disguise themselves behind political parties.

Those who defend the term “revolution” argue that there were thousands of deaths from the Romanian people and also that there was a massive popular uprising against the communist regime.

Either way, history will prove what happened in 1989 in Romania – was it a revolution or a coup d’etat?

Has anything changed in Romania during these 30 years?

30 years after the “revolution” an external viewer witness a bitter transformation: internal political rivalries divide the country and the European and American involvement in the Romanian internal affairs, judicial and economic, are not seen with good eyes by all Romanian citizens.

In spite of all these, Romania has changed a lot during the years following the events from 1989. Not only was the communism replaced by democracy and socialism by capitalism, but later, in 2004, Romania joined NATO and in 2007 also joined European Union.

With an economy which is increasing and constitutes the 7th economy in the EU, with 19 mil. inhabitants in the country and more than 5 million outside its borders, Romania might be one of the developed countries in the future, following Poland’s example.

Romanian IT exports will reach EUR 4.7 billion in 2019