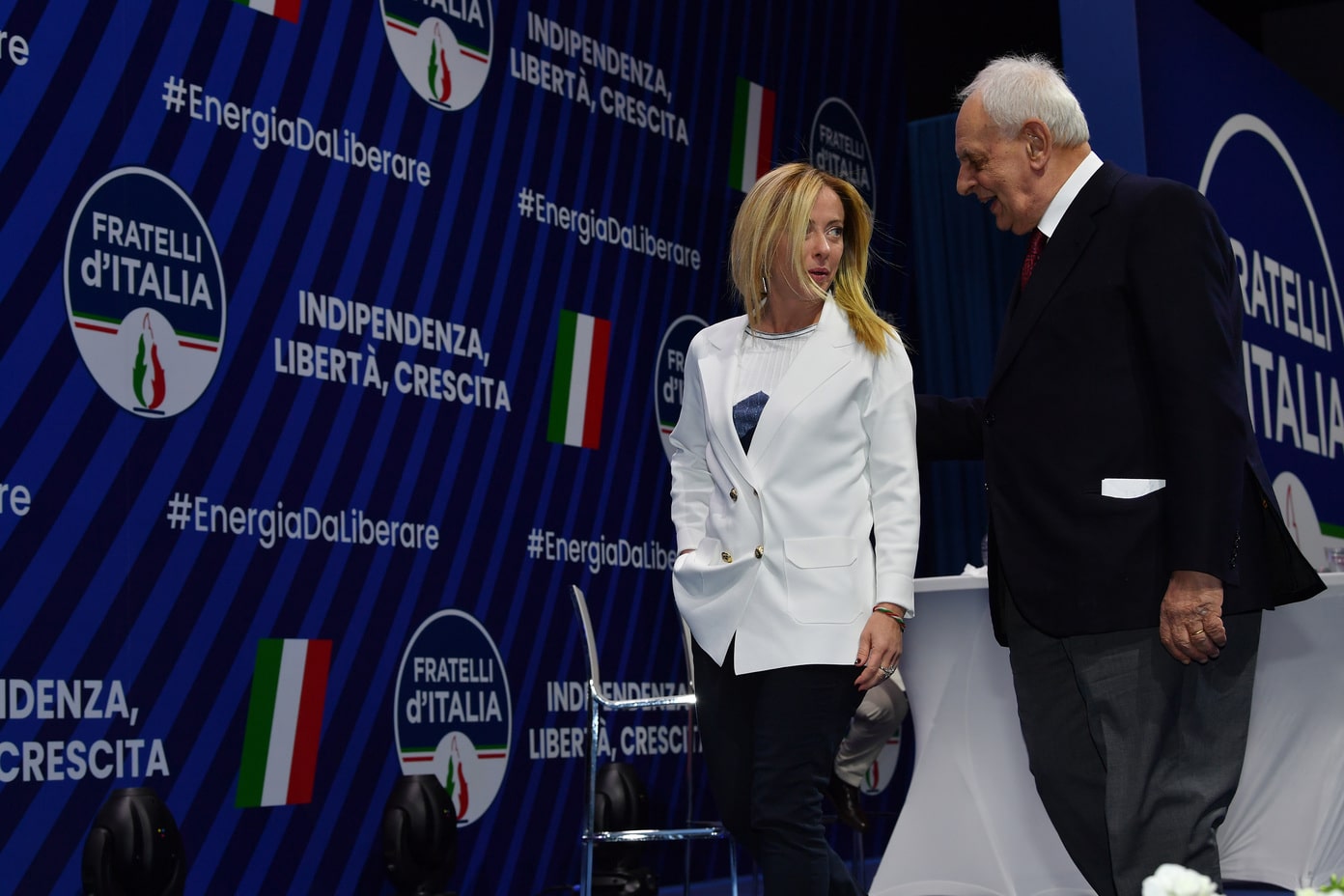 Fratelli d’Italia is a right-wing, national–conservative political party in Italy led by Giorgia Meloni. She also became the president of the European Conservatives and Reformists Party in 2020, formerly known as the Alliance of Conservatives and Reformists in Europe (AECR/ACRE). After her party receives the most votes in the 2022 general Italian election, she is expected to become Italy’s first woman and next prime minister.

The important underlying aspects of the history of the Fratelli d’Italia (FDL) Party’s emergence don’t stop here. Giorgia Meloni and the other party leaders come from the extremist National Alliance founded in 1995, which emerged into The People of Freedom Party (PDL) led by Silvio Berlusconi. A right-wing split within the PDL party led to the emergence of FDL, which is represented by a tricolour flame symbol and is one of the most right-wing-led parties since 1945.

FDL is not only growing in popularity all over Italy, but it’s also starting to expand to other European nations regarding right-wing politics. As mentioned by Defapt.ro after  FDL won the elections in Italy, Pasquale Elicona took his role seriously and wants to enter Romanian Parliament in 2024. One of the Romanian Parties targeted for possible support or alliance is AUR, the Romanian nationalists, now reaching 25% popularity and voting intention in Romania.

Outside of the political ties and duties, Elicona is a successful businessman and a director of many recruitment companies that brings Italian workers to Romania. His goal is to expand the party in all Romanian counties and city elections by collecting votes from the Italians spread across the country and under the scope of supporting and giving a voice to the minorities and the Italian community.

The Romanian parliament is somewhat welcoming to right-wing politics, with various subliminally patterns of nationalism in different present parties. The president of the secret services in Romania, Eduard Hellvig, announced on multiple instances various references directed towards such right-led mentalities:

‘’We are in need of Nationalism in Romania’’

President of the Romanian Secret Services

FDL from the larger view of Europe

Romania is not the only country where right-wing politics are present and slowly growing in popularity. Regardless of the type of nationalism, offensive or defensive, there are countries such as France, Hungary, and Sweden, where right-wing parties are established and have already started discussions with the EU.

FDL vs the European Union sentiments

These political changes and emergences are making the European Union enter a state of readiness and weariness due to the uncertainty of the type of political mindsets the nationalist parties will adopt. This is due to previous situations that proved the majority of right-wing and nationalist political parties, including Meloni’s FDL, tend to be against the EU legislation and to challenge the EU’s rules and regulations.

‘’We have to see which Meloni will turn up at negotiations, the pro-NATO, the pro-Ukraine Atlanticist, or the anti-EU expressing willingness to challenge EU…[…]’’.

Ursula von der Leyen, president of the European Commission, is yet to comment and go public on the unfolding events. She even mentioned that:

‘’ If relations went in a difficult direction, then the EU had tools to deal with such crises’’

President of the European Commission

This could only mean that the measures taken with the other states that previously challenged the EU will be applied to Italy. The political spectrum is shapeshifting worldwide, and the EU is prepared to face any situation.

Is Italy going to exit the European Union? After Brexit, no one can say that a particular country is to stay in the EU, as the national political configuration is changing and Euro-sceptics are taking over the power.