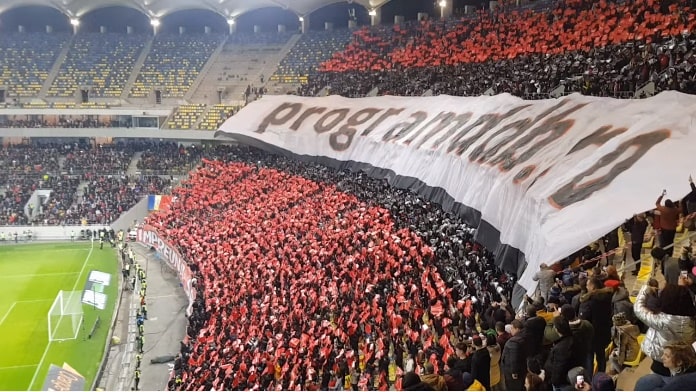 DINAMO Bucharest beats their eternal rival, FCSB (formerly Fotbal Club Steaua București) with 2-1 on Sunday. Andrei Sin and Valentin Lazăr scored the goals for DINAMO Bucharest, while for FCSB scored Florin Tănase from the penalty spot, just before the half time.

‘Derby de Romania‘, as it is known among football fans, was won by the underdogs, (DINAMO are also known for their nickname of ‘red dogs“), as everybody expects FCSB to have an easy game against their rivals. Yet, DINAMO won the game in a very determined manner with the open support of those almost 20,000 DINAMO ultras who chanted from the beginning to the end of the game.

DINAMO players wore T-shirts with ‘DOAR DINAMO BUCURESTI‘ (Only DINAMO Bucharest) written on front, as a grateful gesture to the supporters who take part in this program, DDB.

It is worth mentioning that most of the DINAMO fans are also club shareholders through the DDB program: “Only Dinamo Bucharest” fans shareholder’s program club. This is an unique case in Europe, when fanatic supporters help their favourite team by buying shares to the club; so far the DDB program helped supporters buy 10% of the club’s shares and it is an ongoing process.

The money collected helped the club pay the salaries to the technical staff and the players, as the club owner refuses to pay any money to the club anymore. This is why the supporter’s association decided to proceed like this and to help the team.

DINAMO Bucharest is to be bought by an important EAU investor, who already bought Charleston football club, from England. His conditions, though, are for the club to get his license for another year, meaning all the debts to be paid in due time, including the salaries to the players, and for the club to stay in the first division of the Romanian football championship.

Anybody can buy shares at DINAMO through this unique program and, if you’re a fan, you can do it as well, with only EUR 48 per year or, for the elite members, EUR 1948 per year, both offering different advantages to the shareholders.