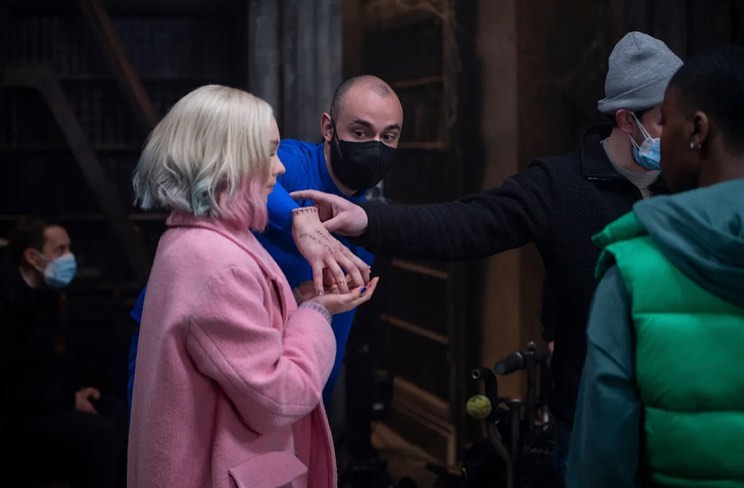 The fans of the famous Addams Family movies are undoubtedly aware of the new series “Wednesday“, now on Netflix. The beloved characters are interpreted by actors and…a magician. Yes, the character Thing, the cut-off hand crawling along the other family members, is “interpreted” by a 25-year-old Romanian magician, Victor Dorobantu.

Why a magician? Vanity Fairs answers.

Dorobantu, a 25-year-old magician from Romania, lived half a world away from Christopher Hart, who played Thing in the 1990s Addams Family movies, but they had a lot in common. Not only are they two of the only people on the planet to play this particularly strange character, but both are magicians. Hart still tours widely and is a fixture at the Magic Castle club in Los Angeles.

Even the shooting was done in Romania. While in the movie the plot takes place in Vermont, they filmed everything in Buftea, at the movie studios.

Was it difficult for Dorobantu to get the “role”? He hadn’t expected that, as there were other magicians at the casting, but he did something surprising which might have influenced the director, Tim Burton:

I remember that I went to the casting with no expectations. It was a casting house in Bucharest. A couple of days later, someone called and said that I’m one of the last three of the magicians that were chosen. And when I got to Buftea Studios near Bucharest, I was there and two other magicians from Romania that I’m a big fan of were there. I was like, ‘I have no chance. These guys are a lot better than me.'”

The moment I met Tim, I just felt that we had a connection because when I put my hand on the table and we started talking, my hand was moving without [my] knowing. I was playing Thing while I was talking with Tim Burton.

Victor Dorobantu on how he got the part in Wednesday

So, this little thing of playing with his hand the way Thing moves in the movie got him the role in Wednesday. Clever, even if Dorobantu says it was not aware of that fact.

Victor Dorobantu has done everything to make Thing one of the most attractive characters in the Netflix series. And along with that, he has also succeeded in adding fame to his magician act. Who wouldn’t go to see him live, performing some magic after everybody knows he played Thing?