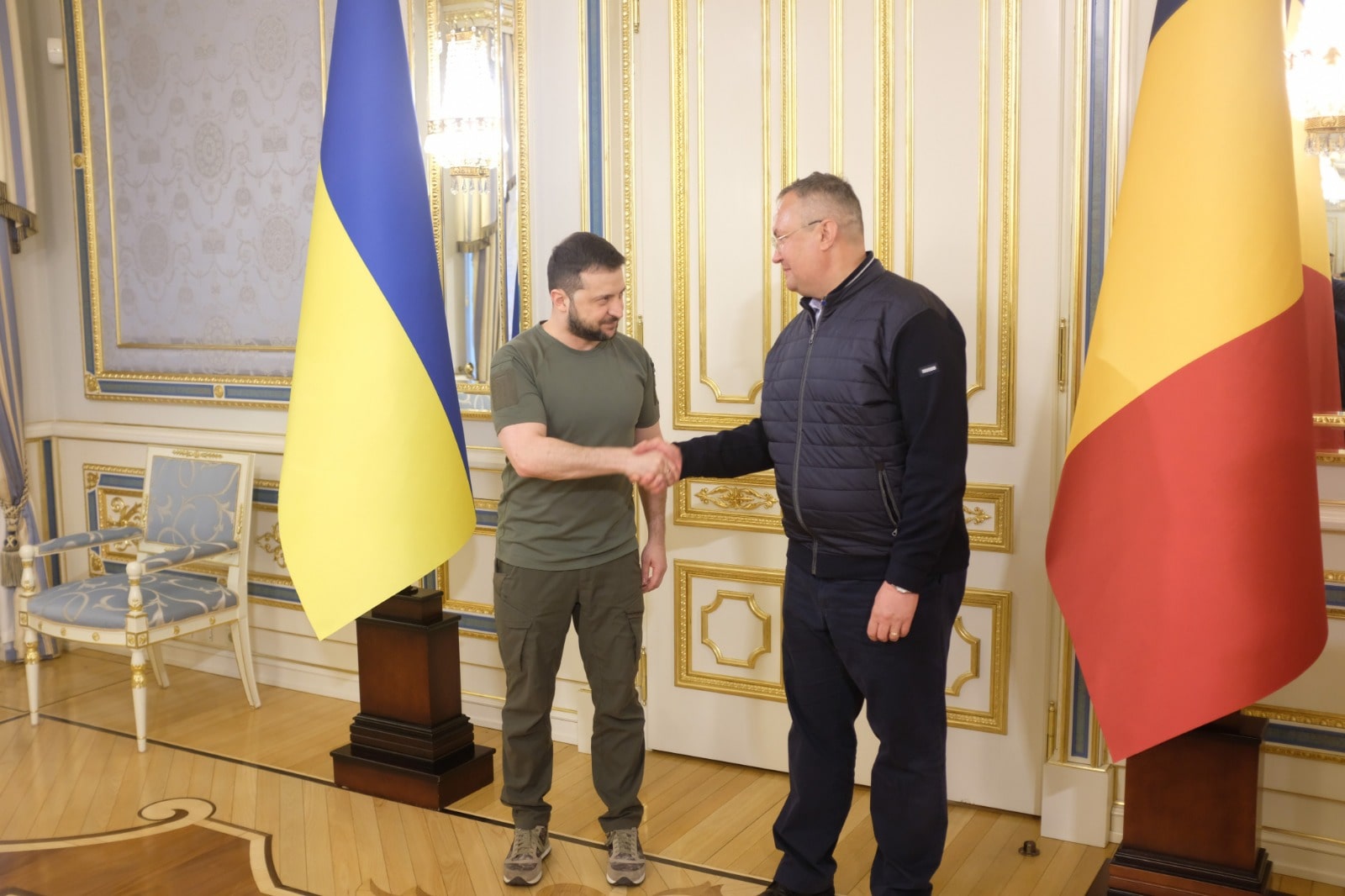 On April 26, 2022, the Prime Minister of Romania, Nicolae-Ionel Ciucă, paid a working visit to Ukraine, to Kyiv, during which he was accompanied by the President of the Chamber of Deputies Marcel Ciolacu and the Minister of Foreign Affairs Bogdan Aurescu.
The Prime Minister of Romania was received by President Volodymyr Zelensky and had meetings with the Prime Minister of Ukraine, Denys Shmyhal, and the President of the Verkhovna Rada Ruslan Stefanchuk.
The program of the visit included a visit to the towns of Borodianka and Irpin, near the capital Kyiv, which were severely affected by Russia’s illegal, unprovoked and unjustified aggression against Ukraine. Prime Minister Ciuca sent a message of condemnation in the strongest terms of the Russian invasion, human atrocities, and material destruction, expressing Romania’s support for an international investigation into the prosecution of those guilty of international crimes, including by contributing to a recent voluntary financial decision, decided by the Government of Romania, to the Trust Fund of the International Criminal Court.

In talks with Ukrainian officials, the Romanian Prime Minister reiterated his support for Ukraine’s sovereignty and territorial integrity and outlined multidimensional support measures for Ukraine and the Ukrainian people in the war, including the management of the more than 820,000 refugees who passed the border with Romania. The Prime Minister highlighted the numerous administrative measures taken since the beginning of the Russian aggression to allow Ukrainian refugees access to the national territory and ensure the necessary protection conditions, such as setting up refugee camps and regulating free access to medical, educational, and transport services and the labor market. Prime Minister Nicolae Ciuca noted the attitude of extraordinary compassion and solidarity of the Romanian people with the Ukrainian people, reflected in the consistent volume of humanitarian aid delivered to Ukraine. The Prime Minister underlined that Romania has also assumed an intermediary role in the transfer of international assistance to Ukraine, through the humanitarian hub set up in Suceava on March 9, 2022, in which 32 humanitarian convoys have so far transited with 163 trucks…
Prime Minister Nicolae-Ionel Ciuca discussed new possibilities for support for Ukraine with Ukrainian officials.
Thus, the mitigation of the adverse effects of the war on the Ukrainian economy was examined, particularly regarding the possibilities for exports of cereals and animal products. Among other things, Prime Minister Ciuca mentioned, as a concrete support measure, the temporary liberalization by Romania on the national territory of the road freight transport carried out by Ukrainian operators starting with April 5, 2022, the beginning of the rehabilitation of a broad gauge railway in the port of Galati direct access of railways in Ukraine and the Republic of Moldova and shortening the transshipment time, analyzing the possibility of increasing transit capacity through common border crossing points, and extending the sanitary-veterinary control to Ukraine through the port of Constanța.
The Romanian Prime Minister also stressed the importance of developing connectivity between Romania and Ukraine by opening new border crossings, highlighting the critical role of the Iscaccea-Orlivka crossing, which opened in 2020. Also of particular importance was given to the analysis of options for exploiting the potential for energy cooperation.
The Prime Minister of Romania underlined that Romania is available and interested in participating substantially in the post-conflict reconstruction process of Ukraine, depending on the parameters and priorities defined by the Ukrainian authorities, and a dedicated bilateral dialogue will be established on this subject.
At the bilateral level, Prime Minister Ciuca conveyed the desire to advance the Romanian-Ukrainian relationship to a higher level, starting from the existing potential for cooperation, common security interests, and solidarity between the two peoples. . The Prime Minister of Romania pointed out that the openness and compassion of the Romanian people towards their fellow citizens in Ukraine represents not only the image of attachment to common values but also a real mandate for the authorities of the two states to enrich and elevate the bilateral relationship.
The Romanian Prime Minister stressed the importance of the two related communities, Romanian in Ukraine and Ukrainian in Romania, as authentic bridges between the two societies and noted the behavior of good citizens of Ukraine shown by the Romanian ethnics during the war, expressing the expectation that, through to ensure full respect for their identity rights, including linguistic rights, to make Ukrainian society more robust and more cohesive.
Prime Minister Nicolae Ciuca reiterated Romania’s strong support for Ukraine’s aspirations for European Union integration and congratulated Kyiv on its response to the first part of the accession questionnaire. He mentioned Romania’s position, which has consistently argued that the European Union should offer a European perspective to Ukraine, the Republic of Moldova, and Georgia, which deserve to be part of the European family.
Prime Minister Ciuca also spoke with senior Ukrainian officials about the Transnistrian case, including in the context of recent developments.
All Ukrainian interlocutors thanked the Government of Romania and the Romanian citizens for their support in various areas of direct interest to the Ukrainian side and the solidarity shown, with much empathy, since the beginning of the Russian military aggression. They presented the field developments of the military confrontation and the need for support on several levels. They welcomed and supported the willingness to create a new partnership profile, superior, in all dimensions, for the Romanian-Ukrainian bilateral relationship and assured the observance of the identity rights of the Romanian ethnics.