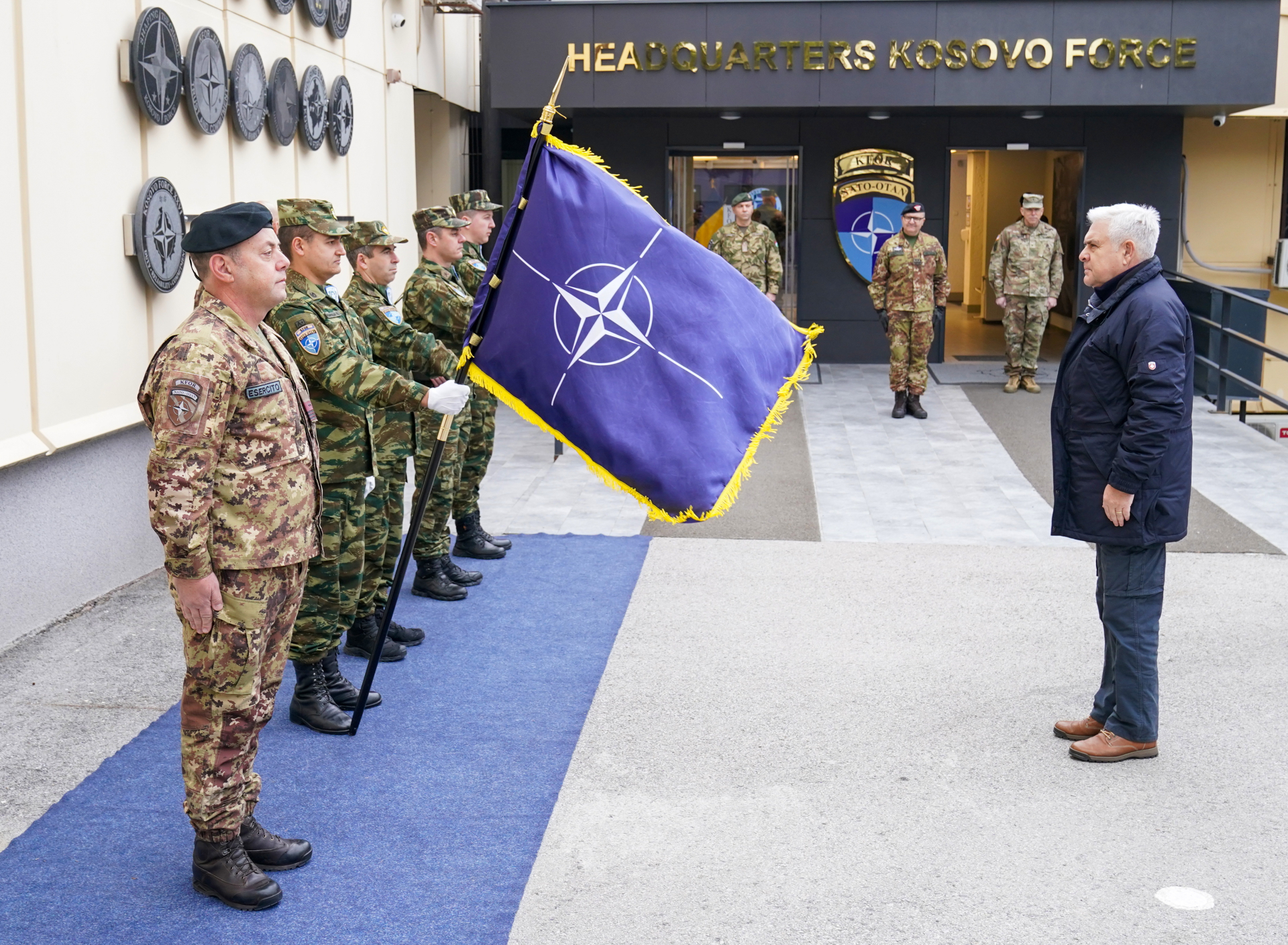 The Minister of National Defense, Angel Tîlvăr, and the Chief of the Defense Staff, General Daniel Petrescu, met on Monday, January 9, with the Romanian soldiers deployed in the NATO military base in Pristina, Kosovo (participants in the NATO Kosovo Force – KFOR operation), according to a press release submitted by the Ministry of National Defense. The program of the MApN leadership also included meetings with the KFOR commander, Major General Angelo Michele Ristuccia (Italy).

In the first part of the visit, the official delegation met with the soldiers who make up the Romanian KFOR contingent. The substitute of the national senior in Kosovo, lieutenant-colonel Pavel-Nicolae Istvanovicz, presented the missions performed, the way of integration into the force structure, and the living conditions at the base. The dialogue highlighted that the morale is very good, the equipment corresponds to the operational needs and the cooperative relations with the KFOR soldiers are maintained at an excellent level.

In his address, Minister Angel Tîlvăr conveyed that, since assuming the mandate to lead the ministry, he proposed to meet the Romanian military in the theaters of operations, Kosovo being the first visit in this series of meetings. He also appreciated the role of the Romanian military in KFOR’s overall relations with members of the local communities. At the same time, he reminded them that the manner of fulfilling the tasks assigned to the Romanian Army within KFOR remains in the daily analysis and decision agenda of the Ministry of National Defense.

You know that, as established this year the ministry was allocated 2.5% of GDP, a budget that allows from a financial point of view, the provision of equipment necessary for defense. But I want you to know that, before discussing acquisitions and endowments, the living conditions of the military are on the first place in the ministry’s attention.

Stability in the Western Balkans represents a strategic axis. Throughout the more than two decades of the allied operation in Kosovo, KFOR soldiers have been a major factor in stabilizing the security situation. NATO’s presence is necessary to preserve visible progress in this theater of operations

For his part, General Daniel Petrescu conveyed to the 68 Romanian soldiers in KFOR that, in the context of the new security challenges, an increased level of attention is needed in order to fulfill the mandate received successfully.

At the end of the meeting, as a sign of appreciation for the way the entrusted missions were carried out, Minister Angel Tîlvăr presented a plaque with the heraldic insignia of the Ministry of Defense to Lieutenant-Colonel Nicușor-Lucian Pârvu. The Chief of Defense conferred the “Emblem of Honor of the Defense Staff ” to Lieutenant-Colonel Pavel-Nicolae Istvanovicz and the “Emblem of Merit in the Service of Peace, Class II” to Sergeant-Major Cristian-Valentin Hangiu.

The discussions of the MApN leadership with Major General Angelo Michele Ristuccia, from the second part of the visit to Film City, focused on the security situation in Kosovo, including the analysis in the regional context and the continued participation of the Romanian military in the KFOR operation.

The Chief of the Defense Staff and the KFOR Commander assessed the effectiveness of the increase in the number of missions in Kosovo, in the intensifying tensions since the end of last year. The two also reviewed the current operation data. “In the context of increasing security challenges, the evolution of the situation in Kosovo requires the strengthening of KFOR’s position and highlights the fundamental role of the allied mission in this theater of operations,” General Daniel Petrescu emphasized.

Since 1999, following the allied intervention that ended the violence in Kosovo, NATO has been conducting the multinational peacekeeping operation KFOR (Kosovo Force). In the beginning, the force structure of KFOR consisted of 50,000 soldiers. Under the mandate of the UN Security Council (Resolution No. 1244/1999), the operation guarantees a safe and stable security environment and freedom of movement for all residents of Kosovo. Over time the security situation has improved, with the Alliance adjusting its KFOR posture by adopting a more flexible and smaller force structure. Currently, KFOR consists of approx. 3,700 soldiers from 27 allied and partner countries, the actions to consolidate multi-ethnic peace being in full coordination with those of the UN and the EU (European Union Rule of Law Mission in Kosovo – EULEX) and with other international organizations. The command of KFOR is transferred in rotation between the representatives of the allied states participating in the operation.

Will Romania Have a December 1st Parade this Year?

US Fly B-52 Stratofortress Bombers over Romania