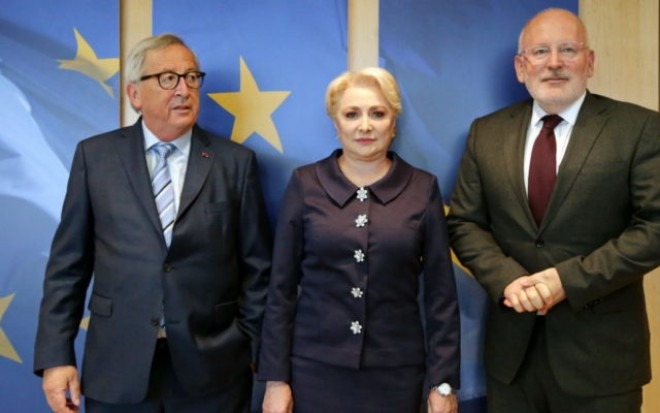 The President and Vice-President of the European Commission, Jean-Claude Juncker and Frans Timmermans, hailed the “European approach” of Prime Minister Viorica Dancila and the Romanian Government’s support for the European project, on the occasion of their meeting on Tuesday in Brussels, informs the Executive’s press office.

According to a press release of the Government, during the meeting, they also discussed the results of the elections to the European Parliament.

“President Juncker thanked Prime Minister Viorica Dancila for the excellent activity so far of the Romanian presidency of the Council of the European Union, with more than 100 files closed, among which the most important are the ones related to the European Border and Coast Guard Agency, the European Labour Authority, the Copyright Directive and the Gas Directive. The President of the EC underscored that this approach must continue, especially in what concerns the advancement of the Multiannual Financial Framework and the preparations of the Strategic Agenda 2019-2024,” reads the release.

Moreover, the two leaders of the European Commission “hailed the Romanian Government’s commitment not to continue with the controversial reforms in the judiciary system and immediately resume dialogue under the Cooperation and Verification Mechanism, in order to record progresses in the reforms in the judicial system and fight against corruption.”

Eurostat: Bucharest to Lose One in Four Residents by 2030

Esports to Be Recognized as Sport in Romania

Dwellers from Musashino, Japan, Support Romania at the Olympic Games

Bucharest is Considered to be Safe for Travel after Reaching 46.7pc Vaccination Rate

Gallup: Romanians are The Most Dedicated Employees in SE Europe