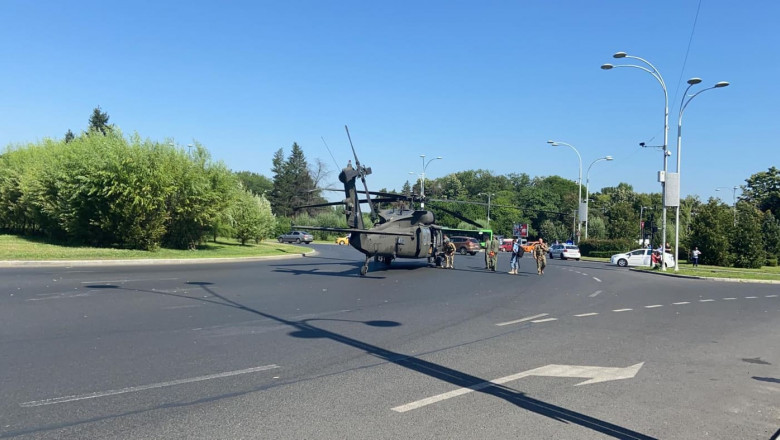 On Thursday morning, around 10.30 AM local time, a helicopter belonging to the American Army had to make an emergency landing in Bucharest, in Charles de Gaulle Square, right on the road, where it knocked down two lighting poles. At this moment, traffic is restricted, with several civilian police and military police crews currently on the scene.

The helicopter is a Black Hawk aircraft and belongs to the United States Army. The aircraft was taking part in the preparations for the Romanian Aviation Day, which is celebrated on July 20. Allegedly, the helicopter suffered a technical failure and hit two public lighting poles in the Charles de Gaulle square area. The two poles fell on the road, slightly damaging a car.

The Army crew immediately announced that they were in trouble when the aircraft was descending. The Romanian police stopped the traffic and the plane managed to land on the road, in the center of Bucharest. Yet, one of the knocked-down lighting poles fell onto a moving vehicle. Two cars were damaged in the incident, no human casualties.

Romanian Military Prosecutors investigate the incident with the support of the US Embassy in Bucharest.

‘Sessions’ from Flow [OS] Prepares to Be Zoom’s Next Rival

Will Romania Have a December 1st Parade this Year?

The European Version of the US Wall Against Immigration