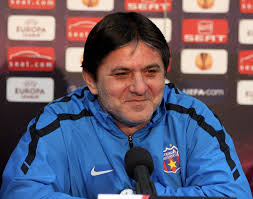 CSA team Steaua confirmed in a press release the resignation of coach Marius Lăcătuş after the football team missed the chance to promote in the third league, according to Agerpres.

“Steaua Bucharest confirms the resignation of Marius Lăcătuş from the leadership of the technical team of the football team. In the intention of continuity of the project, the unilateral will of the coach Marius Lăcătuş was accepted by the president of the club, Bixi-Pompiliu Mocanu, to be informed and members of the board of directors on the sports line of the unit about the details of the discussions on the subsequent proposals and solutions, “the statement said.

Brexit: Trump convinced that the issue of the “wall” in Ireland will be solved

Ro-Alert messages on flood risk in 8 counties. MAI announces that several county and national roads have been closed

Gica Hagi Humiliated at National Arena in Bucharest, Attended the EURO 2020 Match from the Stands

Night of the Museums 2021 in Bucharest

Study: Hospitality Industry in Bucharest Will Make EUR 3.6 M Due to UEFA 2020 Games